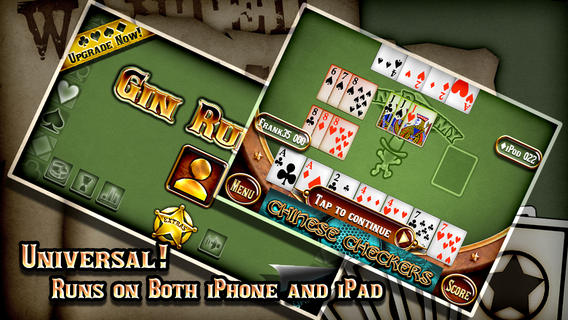 Today we are bringing the Top 3 rummy apps for your iPhone and iPad. The good things about these apps are, they are on an iOS device and we all know they are the best platform to play even the heaviest games with full HD support. But as you know, most of the card games don’t take so much space on your phone and they might be of a maximum size of 20 to 40 MB.

The first iOS rummy app we are going to talk about is Gin Rummy⋆ by Trivial Technology. The app is exclusively optimized for iPhone 5 or higher. This free rummy game consists of 3 different game play modes: Oklahoma, Straight and Gin Rummy. If you find the game too easy to play, change the difficulty level as Trivial Technology, who are the developers of this app made 3 difficulty levels to have that added entertainment. When you start playing look for the 15 achievements, which when achieved you can rank higher on the leaderboard. Also, automatic melding helps a player on the small screen of iPhone and iPods.

Indian Rummy by Nerdylotus is another great rummy app for iOS platform. The game is not a big hit India where Indian Rummy originated which might be because of the platform the app got launched. The game doesn’t have any great features but if you want to play traditional Indian rummy, you should go for this free app. The game is only 6.90 MB and so it’s not a heavy game that lags or hangs a lot!

Indian Rummy by Octro Inc. is one of the most downloaded rummy apps in India. This online multiplayer app has live tables which allow you to play with millions of players all around the world. The UI of the game is great and you will enjoy playing from the time you join in. The rummy app also allows you to make private rooms and play with your friends and family. The size of the app is less than 40 MB and so, it can be downloaded via your cellular network.

These are the Top 3 rummy apps in US and Indian market together. Download them via your cellular or WiFi network and let us know how much you enjoyed playing them. Also read the best rummy apps for Google Play and feel free to comment about it in the comment section.