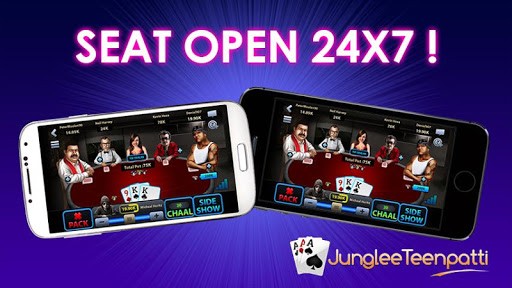 Every month we select a list of card games/apps that makes a rise in number of installs and grossing. The card games/apps that we select are only for Android market this time. So, you can be sure that the apps we mention and review about are already quality checked by Google itself. The review that we write here is dependent on the gameplay, user interface and user experience only.

Top 3 Card Games for the Month of June

The card games/apps that made the top of our list for the month of June are given below:

Now only released for the Android market, the game was launched on the first week of May. It gained much popularity due to its amazing 3D user interface and gameplay. Now with its version 1.0.3 this game has already rectified all the bugs that the users had reported. So, a plus one for the excellent support Junglee TeenPatti has provided. With an app rating of 4.3, this card game surely takes the number one spot in our list.

Octro did the best thing for the Indian players of online rummy. They brought a fully functional PC game to the mobile device and made huge profit out of it too. We are talking about Indian Rummy which has more than 1M downloads. The game is very much similar to how we play on our desktops or PCs. The newest version of the app has allowed you to play rummy tournaments with random players. The game has got easy to use user interface which makes the players come back to the app again and again. This card game has also got an average rating of 4.3 and so is in the same rank of Junglee TeenPatti.

Solitaire by MobilityWare claims to be the best Solitaire card game in India. This game is fully packed with features that card game lovers will love. An excellent user interface which we can make to both portrait and landscape modes with statistics to know the number of games won is an excellent way to know your card game skills. The game has been downloaded for more than 5M times and has a rating of 4.4.

Hope you have enjoyed reading this month’s app reviews. If you got any comments or feedbacks regarding any of the apps or reviews we have written, let us know in the comments section below.