Tips and Strategies for Canasta Rummy 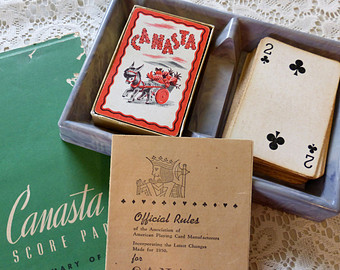 Canasta rummy is one of the most popular card game and also one of the most favored rummy variant. Canasta rummy is also known as Congas in Greek has its roots in Uruguay and was found in 1939. A basket is used in Canasta rummy to hold the discarded cards. For that reason it is also called Basket rummy. This variant of game is usually played with two players and two decks of playing cards. There are other variations like Canasta for 5 in which more than 2 players can play.

Get as many points in Canasta to win, which is the aim of the game. A dealer is selected before the game starts and his role is to shuffle and distribute the cards. The player sitting left to the dealer starts the game. Each player draws one card either from the discarded pile or from the stock. Player then can choose to discard that card, or if need can discard other card in place of that card. Discarded card goes to discarded pile placed face up.

In Canasta rummy, meld consists only of 3 or more cards of same rank. A sequence is not a meld in Canasta rummy For example; 7-7-7 is meld but 5-6-7 is not a meld. Also group of wild cards is not a meld i.e. 2-2-2 and jokers do not form a meld. Also, a group of two natural cards with on wild card consist of meld. There is also one term “Canastas” which consist of 7 or more natural cards of same rank. Points are computed on basis of cards and player having highest points is considered as winner.

Canasta rummy demands expertise and well-defined memory. Predict the cards your opponent might be having in his hand by checking out the cards he is discarding. Later on you can block him by discarding cards that will be of no use to him. Middle cards like 5, 6 and 7 are more precious than high cards as they are used in more combinations. Don’t let your opponent read your game by checking out your gameplay and discarded cards. Learn more and more of rummy tactics by playing in online rummy sites with random opponents.

Tips and Strategies for Canasta Rummy