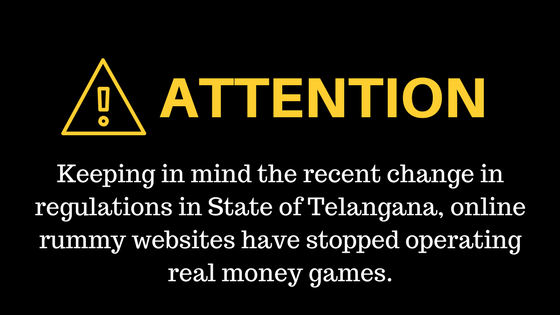 Telangana Government recently launched four ordinances that restrict players from the state to indulge in any activities related to rummy games, both online and offline. With the issue of new gaming policy, most premier online rummy websites like Ace2Three Rummy and Classic Rummy have already stopped their operations including free rummy games.

With the new law coming in, the Telangana Gaming Act of 1974 will be updated and the players will be tracked by the cyber police. The amendment also ensures players don’t get into any form of gambling although rummy is considered as a skill based traditional game. There are over a million of players who are actively playing online rummy in websites like Ace2Three, RummyCircle and Classic Rummy. With this new law, most of the players are unhappy as they won’t be able to make any transactions including withdrawals of their winnings until the hearings are over.

3 months ago, Telangana Rashtra Samithi (TRS) released a gaming policy that suggested offering incentives to online gaming investors but was not happy with the way online card gaming websites like Ace2Three and RummyCircle were operating. The local police of Telangana also received numerous complaints on Ace2Three, RummyCircle and Classic Rummy regarding the financial loss suffered by players by investing on real money rummy games. The new law brought by TRS will classify online rummy and poker as gambling and will impose a fine of Rs.5000 for the first offence and even to imprisonment along with a bigger fine for second offence onwards.

With the issue of new law, most of the illegal card clubs are forcibly shut down and the rummy websites operating from the state are offering only free games. Ace2Three, Classic Rummy etc. have already added a banner on the homepage that notifies the players about the same but they are hopeful to start operating again once the legal implications are dealt with. The consortium of online gaming websites will be challenging the new law in coming few days and we just hope, a traditional skill game like Indian rummy don’t get banned in legal barricades.