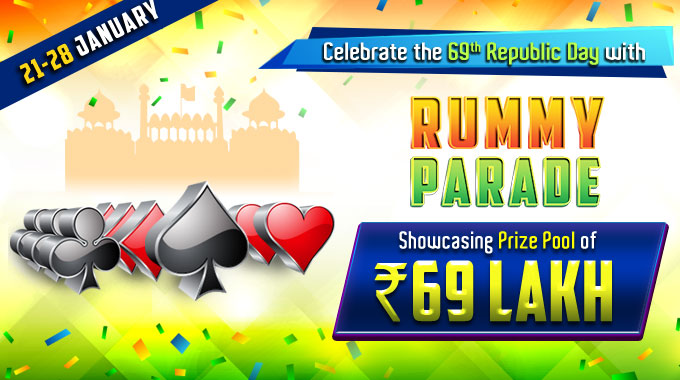 RummyCircle is celebrating the 69th Republic Day of India grandly by bringing the online cash rummy tournaments with Rs.69 lakhs prize pool. The tournaments will have multiple satellite and shooter rounds to get seated for the grand finale scheduled on 28th January 2018. The cash rummy players at the site can join the tables by paying an entry fee according to the rounds they are joining in. The entry fee can be as a low as Rs.70 for the Shooters.

Get the entire details of the Republic Day special rummy tournaments at RummyMania.com and book your seat starting from 21st January.

The final round of the Rummy Parade will run on 7:00 PM with a maximum of 1401 players. Qualification to finale is by winning the entry tickets from the Satellite. So, get seated for these cash rummy tournaments now and play for a big prize pool of Rs.69 lakhs!

We would love to your feedback on the gameplay, promotions and tournaments at RummyCircle.com. Subscribe to Rummy Mania and post your views in the comment section below.