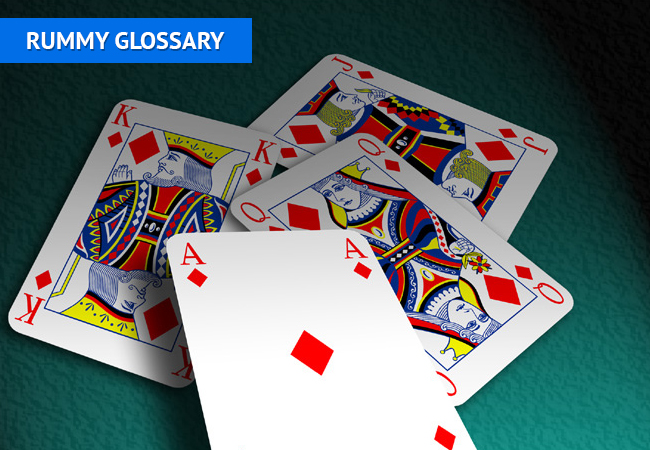 As more and more online rummy websites are getting launched with different variations of the game, the terminologies can be a bit confusing. If you have an account in any of these websites, be it free or cash tables, the terminologies used can vary. So, it’s always handy to have a guide on the terms and words used by these popular Indian rummy websites.

101 Pool Rummy – It is a popular rummy variant which is played for many deals until a single player emerges as the winner. Players get eliminated once their accumulated score exceed 101 points.

201 Pool Rummy – It is another type of Pool Rummy where players get eliminated once they cross 201 points. Only a single player, who survives without gaining 201 points, wins the game.

Buy In – It refers to the amount that one has to pay in order to play a cash rummy game.

Closed Deck – It refers to a pack of cards where all the cards are placed face down after the cards are distributed to each players.

Deals Rummy – It is a form of rummy games where players play for a fixed number of deals. The player with the highest winning chips earned from the losing players wins the game.

Deck – It is the pack of pack of cards used in the game of rummy. In online rummy one or two regular decks of 52 cards along with the Printed Jokers are used.

Discard – The act of disposing of a card from the hand after picking a card is called as discarding a card.

Draw – The act of picking a card from the Closed or Open card is called as drawing a card.

Drop – The act of quitting a game while playing is called as dropping from an Indian Rummy game. If a player clicks on the drop button during his first turn, it is called as first drop; and, it is called as middle drop if he quits after drawing a card.

Face Card – All the high value cards like Aces, Kings, Queens and Jacks are called as Face Cards

Points Rummy – A form of Indian Rummy game where it is played for just one deal is called as Points Rummy.

Set – A group of three or four cards belonging to the same rank but of different suits is called a Set.

Wild Joker – A wild Joker is selected randomly in the beginning of the Indian Rummy game. It can be used to replace any card to make sets or sequences.

So, if you want any clarification regarding any Indian Rummy term, just check the definition mentioned above. Clear your doubts and enjoy playing online rummy games.