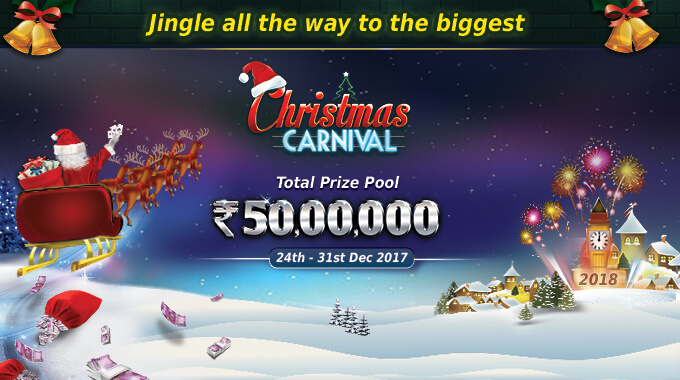 RummyCircle is popular in bringing the party mode during any festival. In December, the players at RummyCircle have two reasons to celebrate with Christmas and New Year special tournaments. The rummy tournaments are named Christmas Carnival and will run from 24th to 31st December 2017.   If you have a real money account at RummyCircle, join the satellites starting from 24th December to win cash prizes worth Rs.50 lakhs.

There are multiple Shooter and Satellite tournaments every day during the promotion period. Buy-in with a very small fee and win your way to Grand Carnival Finale for a big prize pool.

How and When to Join the Christmas Carnival?

If you are looking forward to joining these rummy tournaments with a small entry-fee, take part in the Mid-Night Shooters and Shooters with entry-fees as low as Rs.70. These tournaments will take place from 25th to 31st December 2017 and will reward the top players with Satellite round tickets. You can also decrease the steps to take to reach the Grand Carnival Finale by joining the Super Satellites with an entry-fee of Rs.7500. These tournaments will also run from 25th to 31st December 2017. The winners will get their direct entry ticket to Grand Carnival Finale.

The rummy tournaments will be played with 13 cards. If you are into 21 cards rummy or want to learn 21 rummy card game rules, start playing on Junglee Rummy or Adda52 for unlimited fun hours. Also, subscribe to RummyMania.com to get the latest news on Indian rummy promotions, tournaments, bonus offers and cashback deals.